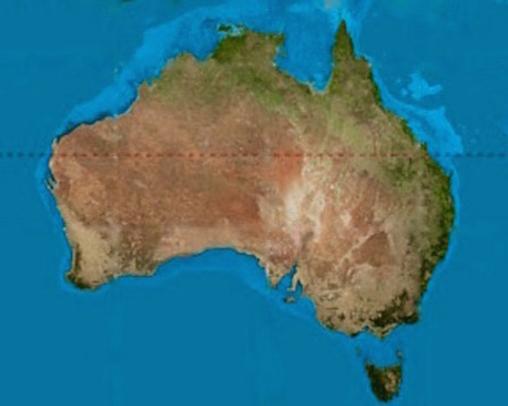 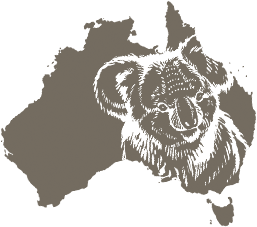 Australia, with Tasmania below.  Tasmania was part of Australia until about 10,000 years ago, when the oceans rose following the Ice Age.  It  was named after the Dutch explorer, Able Tasman.

​​​​Australia (and Dutch Genders) from A-Z

Learn the Dutch Genders in One Day!*

The secret to learning the Dutch grammatical genders amazingly fast is to focus on learning just neuter words with one syllable- there are about two hundred of them in common use.  The genders of more than 90% of all other Dutch nouns can then be determined by what sort of things they are, or by their beginnings or endings.

To learn the 200 neuter monosyllable words easily, just add ' Aai- ', which stands for 'Australia' and rhymes with the Australian pronunciation of "g'day", to the beginning of each word. Then use the following ' 't aai-' pictures to lock the words in your memory.

' '.t ' is an old fashioned abbreviation for 'het', and 'aai' is pronounced as it is in Dutch, except an Aussie twang is optional. " '.t aai-" was chosen as a mnemonic aid because the 'aai-' prefix not only sounds 'Aussie-ish', but is easy for English speakers to pronounce, is eye-catching, isn't used to begin any existing words, and helps stress the one-of-kind nature of each noun. The green and gold colors are the national colors of Australia.

*The caveat to this plan is that it does require that you recognize if a word is a noun, know approximately what the noun means, and know if it is derived from a verb or an adjective.  Knowing English is a big help because many words are the same in both languages, including about half the " '.t aai-" words!